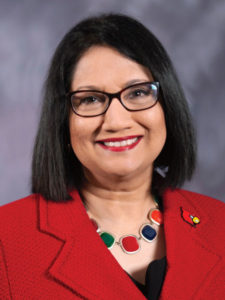 UofL President Neeli Bendapudi has been named a MOSAIC Award winner by Louisville’s Jewish Family and Career Services. The awards go to new or first-generation immigrants and refugees who have made an impact in their professional fields and the community.

Bendapudi moved to Louisville in 2018 to take on the role of president at UofL, the first permanent female president and person of color to hold the position.

Her research has been published in top tier journals including the Journal of Academic Medicine, Harvard Business Review and Journal of Marketing, and featured by media outlets including the New York Times, CNBC, CNN, MSNBC, WebMD and Fox News Network. She has experience on public and private boards and served as EVP and Chief Customer Officer of Huntington National Bank.

Bendapudi has sat on publicly held and non-profit boards and is a former Leadership Foundation Fellow of the International Women’s Forum, selected as one of 27 women representing 18 countries for this prestigious honor.

In her career, she has fought for equity and inclusion and in her time at UofL, has transformed the university’s culture, infusing a renewed passion in the city and community. The JFCS recognizes Bendapudi’s continued call to the university community and the Louisville community at large to celebrate diversity and foster equity in order to achieve inclusion.

“Like Neeli, JFCS respects the undeniable humanity of each person. This sentiment is one of our guiding values, called Kavod. Every day our staff serve clients and their families with Kavod because we believe that to truly serve all in Greater Louisville, we must first understand their strength and their story,” the organization stated in a blog post.

She is one of five total recipients of this year’s award. Others include:

Benadapudi and the rest of the MOSAIC Award winners will be recognized at a virtual event May 27 at noon on the JFCS social media channels, @jfcslouisville and website, jfcslouisville.org.